Following on my previous blog on the naming of the River Rhee,  I have just been to the British Museum to see the ‘Ashwell Hoard’ on display in room 49. 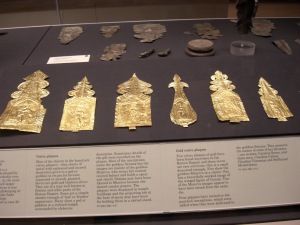 Here we see some of the votive offerings to the Goddess Senuna discovered near Ashwell End. There are several websites offering detailed information on the hoard, beginning with Wikipedia (search on ‘Goddess Senuna’). Other local sites with additional information are  Ashwell Museum, which includes some great photos of the display at the British Museum and North Herts. Archaeological Society, which includes follow up notes on subsequent archaeological field surveys and excavations in the vicinity of the find.

The archaeological evidence suggests a sacred shrine enclosing a former spring head into which offerings were placed. This was surrounded by a complex of buildings including accommodation for pilgrims, workshops, a possible temple and a bath house located by a nearby stream, feeding the river Rhee. The field surveys and excavations carried out subsequent to the original 2002 find showed the layout of an Iron Age and Romano-British settlement over some 8 hectares of land. This pre-existing settlement and evidence of earlier offerings is what indicates a hithertoo unknown Celtic river deity.

The location of the find and subsequent archaeology is in a field at Ashwell End near the River Rhee. The interesting point is that the Rhee itself rises from springs at Ashwell village at a site forming a natural amphitheatre, which makes one wonder why a shrine was not built here rather than a mile or so downstream?  In September 2011 some test beds were dug in Ashwell under the auspices of the Cultural Olympiad. The North Herts. Arch. Soc. website notes that hithertoo very little work had been done to consider the origins of the village or a possible link with the earlier settlement and shrine. It will be interesting to read the report of this work when it is published. Given the existence of a pre-Roman and Romano-British shrine to the river goodess Senuna, can we not consider the Rhee to be an ancient sacred river?!

Looking at the geography of the area (OS Landranger 153) you see Ashwell Street which formed part of the ancient Icknield Way route running about a mile south of the location point of the shrine and ancient settlement site. This would have been the chief means by which pilgrims would have come to the site to give offerings and would also explain the need for accommodation. The Icknield Way was a major east/west communication and trading route.

On rising ground to the south west of the shrine lies Arbury Banks, a hill fort type construction begun in the late Bronze Age, one of a series in the northern Chilterns and East Anglian Heights along the Icknield Way. It is thought they were located at the centre of small tribal groups and served as secure sites for people, grain storage and holding animal stock. The ‘territorial’ importance of these hill forts is emphasised by their ‘intervisible-ness’ – one perhaps two other hill forts can usually be seen from them. By the Iron Age Arbury Banks was a major site enclosing an area of 12.5 acres, comprising a single large round house in the centre of the fort and numerous smaller dwellings, indicating a settlement of a single large family group. Finds of animal bones and pottery date the occupancy to the 3rd-1st centuries BC. Aerial photography revealed a network of ancient fields in the vicinity. The defended settlement site was abandoned after the Roman occupation. A Bronze Age burial barrow is located at Highley hill about two miles south east of the Arbury Banks.

Before the finds of Iron Age coins and brooches made during the 2003/4 excavations, the Victoria County History notes a find at Ashwell of a copper coin identified as Cunobeline. The Catuvellauni tribe of whom Cunobelinus was chieftan or King in the 1st cent. AD, eventually occupied the area of modern Beds., Herts., Essex and South Cambs., in pre-Roman Britain, and were recorded as a civitatis of Roman Britain, with their capital at Verulamian (St. Albans). It would therefore appear that a Senuna shrine perhaps in an earlier form, was previously part of a Cantuvellauni settlement, which continued under the aegis of the Roman occupation. It is interesting to note the siting of a Roman villa, south of Guilden Morden, only 800 meters NE of Aswell, and close therefore to the earlier pre-Roman settlement and shrine. Perhaps the owners of the villa were responsible for subsequent extension and ‘Romanisation’ of this sacred site? Villas in the Chiltern area were generally sited approximately two miles apart, including a farming estate of about 450 acres, which may have incorporated the lands of the existing settlement? Associated with the villa is a cemetary, which had its origins in the Iron Age, with cremations and inhumations dating from the 1st-3rd centuries AD. (See my later blog on Roman villa/cemetary/shrine complexes in the wider region ) 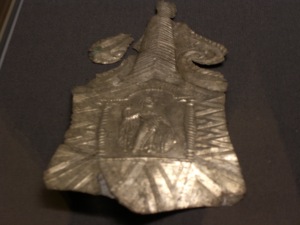 Here you can just make out the figurine on a silver plaque, likened to the goddess Minerva. The general interpretation is that Senuna was an existing Celtic water or river Goddess assimilated by the Romans after the occupation and given the image of Minerva. Latin inscriptions on the offerings all refer to ‘Senuna’ or ‘Senna.’ I have enlarged the one below to show the figure more clearly. 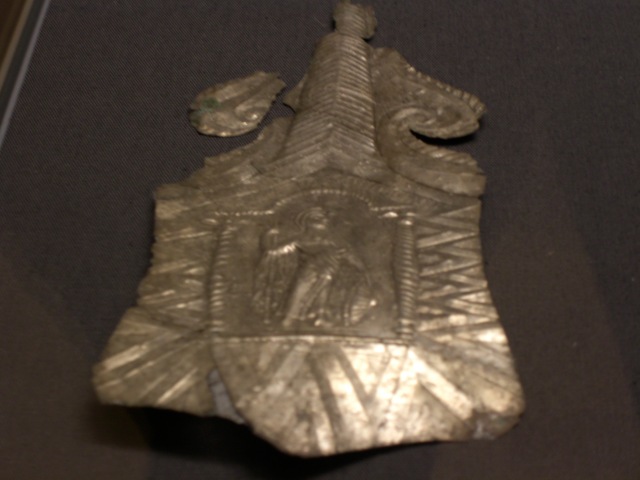 My blog reflects my interests in local history in South Cambridgeshire, growing your own food, and walking in the district and elsewhere
View all posts by jonathanspain →
This entry was posted in South Cambridgeshire local history and tagged Ashwell hoard, River Rhee, Roman-British hoard at Ashwell, Senuna the river Goddess. Bookmark the permalink.